The support around $9,700 was being tested over the past week. The action is slightly fragile and the attempts to break up have encountered resistance around the 50MA. If the support breaks, we may see a test of $9,200 and if it doesn’t hold, the 200MA is around $7,200 which should be taken into account. The resistance in this range is around the 50MA but it sits slightly above the $11,000 level. The strong resistance lies at $12,800. 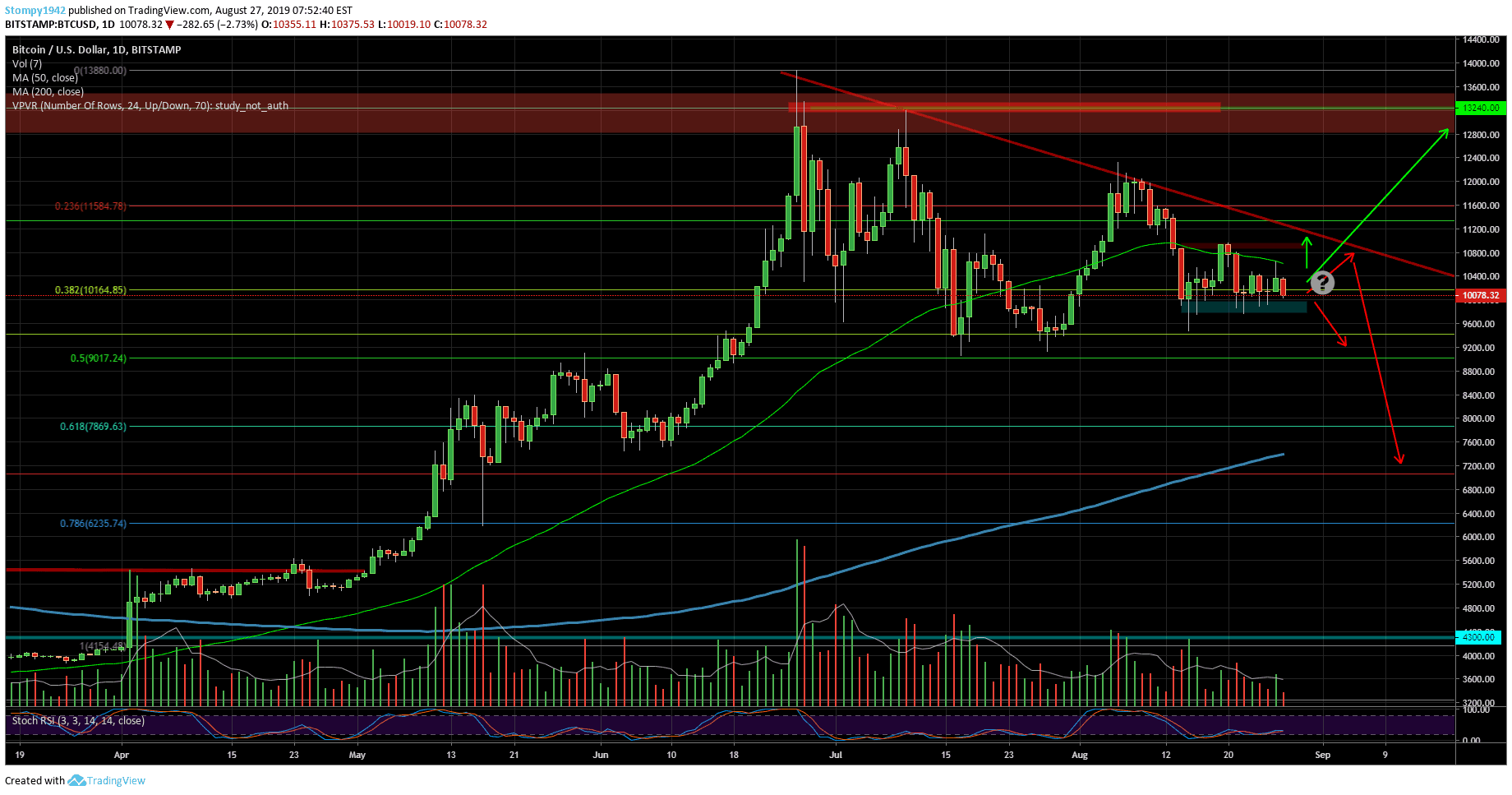 Against the USD, the support around $180 is being considered. It’s also important to consider $160 because if it falls behind that it would lead to a downward trend. Meanwhile, the trend is still considered to be recovering. The resistance in this range is at $200.

Against Bitcoin, support is holding at around 0.0175BTC. Resistance in this range is at 0.019BTC. The downward movements in the graph show a declining trend.

Against the USD, the price continues to rely on the lows of 2019 around 25 cents. Relative stability was replaced by the fear of further lows. Resistance in this range is at 28 cents. Is the winter still going on for Ripple? 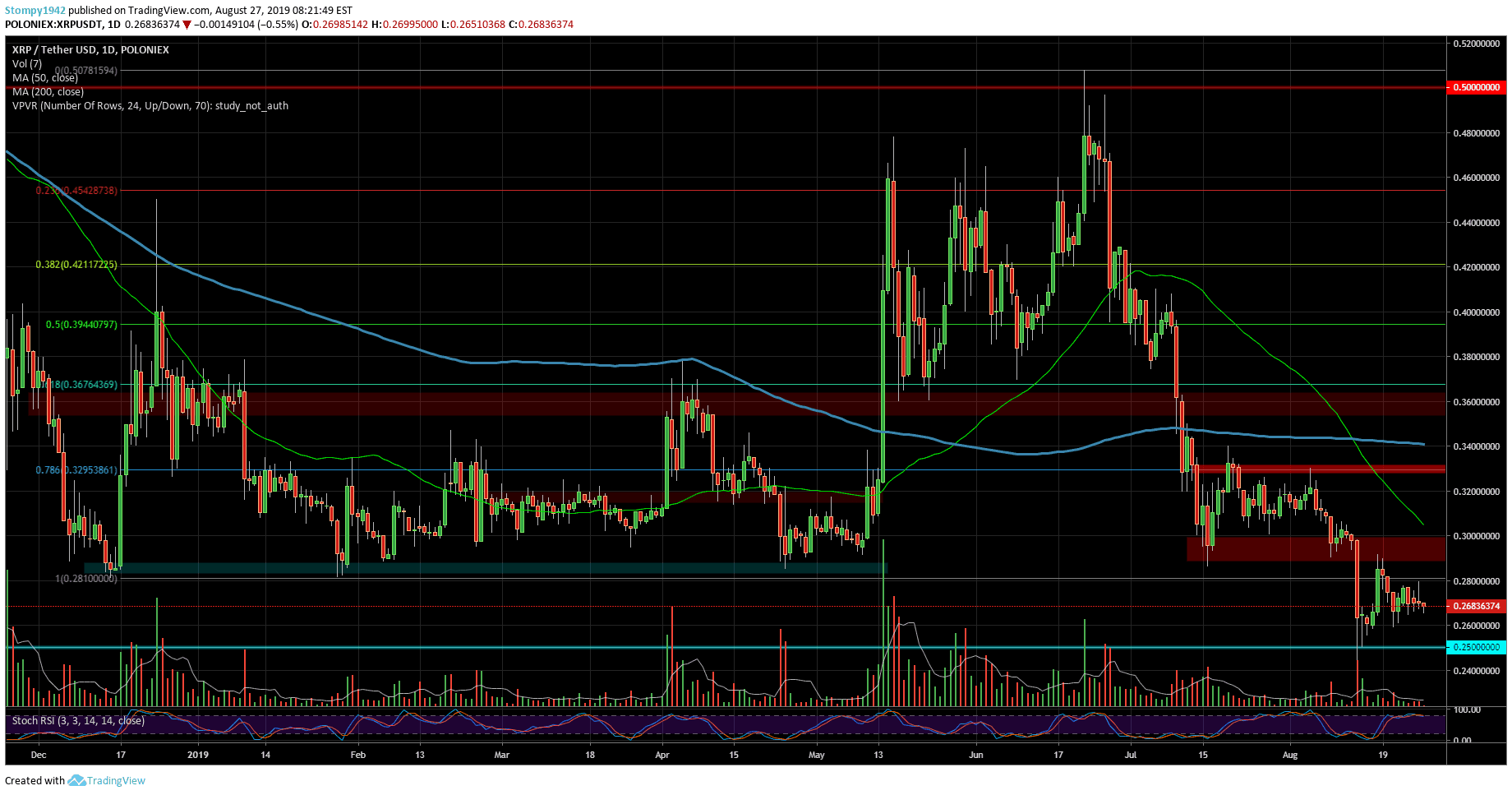 Against Bitcoin, the week’s stable price was supported on the low levels of Fibonacci. One could speculate if that’s the floor or if we haven’t seen anything yet. Support in this range is at around 2500 SAT while the resistance is at 2900 SAT.

Against Bitcoin, we saw a strong downward correction with high trading volume. The breakout attempt over the last few days seems to have come along with lots of trading volume as well. Resistance in this range is at 270SAT. Support is built around 215SAT.

The currency isn’t listed for trading against the USD.

Against the USD, the price has broken down from $8 to $5, where the bottom currently is. In the short term, we can see a positive trend that’s emerging and the graph is drawing lower than before. There was a sharp rise this week as a result of the currency’s involvement in Binance’s lending system. At its peak, it reached $7.5 which put it back to the point where the graph corrected. Support in this range is at around $7, but will it hold?

Against the dollar, the price has broken down from $ 8 to $ 5, where the floor is. In the short term, a positive trend is emerging that the graph is drawing lower than before. A sharp rise this week as a result of the currency’s attachment to the Binance lending system. At its peak, it reached $ 7.5, which put it back to the point from which the graph corrected. Support for the range is built around $ 7. Will it hold?

Against BTC, the volume is rising and the price has broken the 50MA level which signifies resistance to the floor in that range. Resistance is at 0.00075BTC. Support in this range is at around the 0.618 Fibonacci levels – about 0.00065BTC.

Be the first to know about our price analysis, crypto news and trading tips: Follow us on Telegram or subscribe to our weekly newsletter.

Bitcoin Price Should Spike Up Soon, if History Repeats Itself

Bitcoin’s price has been declining in the past few days, being almost 20% down during the last week. This saw many people worried if the 2021 bull run is over. One indicator suggests that if […]

Other Great Companies That Adopted Bitcoin For Payments

With bitcoin’s continued increase in price and popularity, the asset’s mass adoption has skyrocketed in recent months. Apart from notable names purchasing BTC as a store of value, numerous large and small companies introduced bitcoin […]

The Crypto Industry is the Next Multi Trillion-Dollar Opportunity, Says Early Coinbase Investor

Notable tech investor Ron Conway called the crypto industry ”the next multimillion-dollar opportunity in innovation.” On the day when Coinbase’s (COIN) shares officially started trading, Conway opined that the crypto sector is quickly growing, but […]