With each passing day, Craig S. Wright’s reputation continues to take a bigger beating. This time around, a Florida court has found the self-proclaimed inventor of Bitcoin (BTC) to be guilty of not only submitting false documents as part of an earlier testimony but also lying about a legal dispute (related to the estate of his former partner, David Kleiman) to the United States justice system.

The presiding judge, Bruce Reinhart, concluded the latest hearing by ordering Wright to surrender more than $4 billion worth of cryptocurrency in favor of Kleiman’s estate. The assets in question comprise of a whopping 500K BTC as well as half of all the intellectual property that has ever been created by Wright. Moreover, Wright has been ordered by Judge Reinhart to turn over documents in which it is claimed that he had unlawfully seized digital assets from Kleiman.

It now remains to be seen whether Wright is able to comply with the order and actually deliver the BTC to Kleiman’s estate. There is a doubt that arises here because Wright has stated in his latest testimony that he is not aware of where the crypto in question is being stored, nor is he absolutely sure if he even has access to any of these external digital storage entities.

Wright has been claiming for a long time that he is, in fact, Satoshi Nakamoto — the pseudonymous author of Bitcoin’s source code and its white paper, a document that lays out the core design for the currency’s digital ecosystem.

In recent times, when called a fraud, Wright has resorted to suing all those who disagree with the notion that he is the mastermind behind Bitcoin. And even though all of his lawsuits have amounted to almost nothing in the end, the people who have publicly showcased their support for Wright over the years seem to be disappearing rapidly.

In addition to this, a number of established crypto experts and enthusiasts seem to be of the opinion that Wright’s recent submission of false documents to the Florida court could be the final straw as far as his “I am Satoshi” claims go. Cointelegraph reached out to Craig Russo, a crypto investor and owner of Peer — a Boston-based startup behind the popular media outlet SludgeFeed, to get a better understanding of the matter. Russo believes that Wright needs to provide more tangible evidence in order to support his outlandish claims, saying:

“The false documents definitely do not help his credibility. I think the mystery of who exactly made up “Satoshi” will continue to unravel into the future.”

Similarly, Christopher Inks, the founder and CEO of TexasWest Capital — a crypto research trading firm — also believes that, while there is a slim possibility that Wright might be Satoshi, he is making his claims harder to believe — especially with all of the recent stories that have emerged in relation to him. Inks added in a statement to Cointelegraph:

“There is no doubt that he is a polarizing individual and that may simply be the result of his intelligence. Many highly intelligent people have difficulty interacting in a positive way with everyone else. But should people believe him just because he says so?”

Will the drama hurt the market?

Wright is of the belief that in the wake of the aforementioned court ruling, the crypto market could soon be flooded with billions of dollars worth of Bitcoin. However, as mentioned earlier, it appears as though Wright might not have access to the private keys associated with the various digital wallets containing the BTC.

In this regard, it is worth recalling that in an earlier testimony, Wright had said that he had passed on a key piece of information to Kleiman before his demise back in 2013. As a result of his death, Wright thinks it will be extremely hard for him (or anyone else for that matter) to track down the storage entities holding the crypto. With that being said, the self-proclaimed inventor of Bitcoin did concede the following in a recent email to his spokesperson, Ed Pownall:

“The courts ruled that Ira (Kleiman, brother of Dave Kleiman) inherited those billions. Now he has to pay estate tax on that if he wants it.”

As a result of these recent developments, the market at large is now replete with FUD related to an impending market crash that might happen because of BTC being liquidated or moved around.

Cointelegraph has reached out to CryptoYoda, an independent crypto analyst and trader, with over 200K followers on Twitter. In regard to the matter, he stated that he is highly doubtful that Wright really has access to the legacy coins, so all of the lingering concerns regarding a potential sell-off can be set aside for the time being.

However, he did add that the situation will need to be immediately reevaluated if Wright or any other third-party enters the private key associated with the legacy wallet. This, in CryptoYoda’s opinion, will most likely not be the case anytime in the near future. He added:

“As long as no coins are being moved, there is no reason to speculate about a potential selloff imho. Should coins from the legacy wallet move eventually, then we at least have proper grounds for discussion.”

However, since Judge Reinhart passed his verdict a few days back, Bitcoin’s price has witnessed some serious negative action (particularly on Aug. 29). 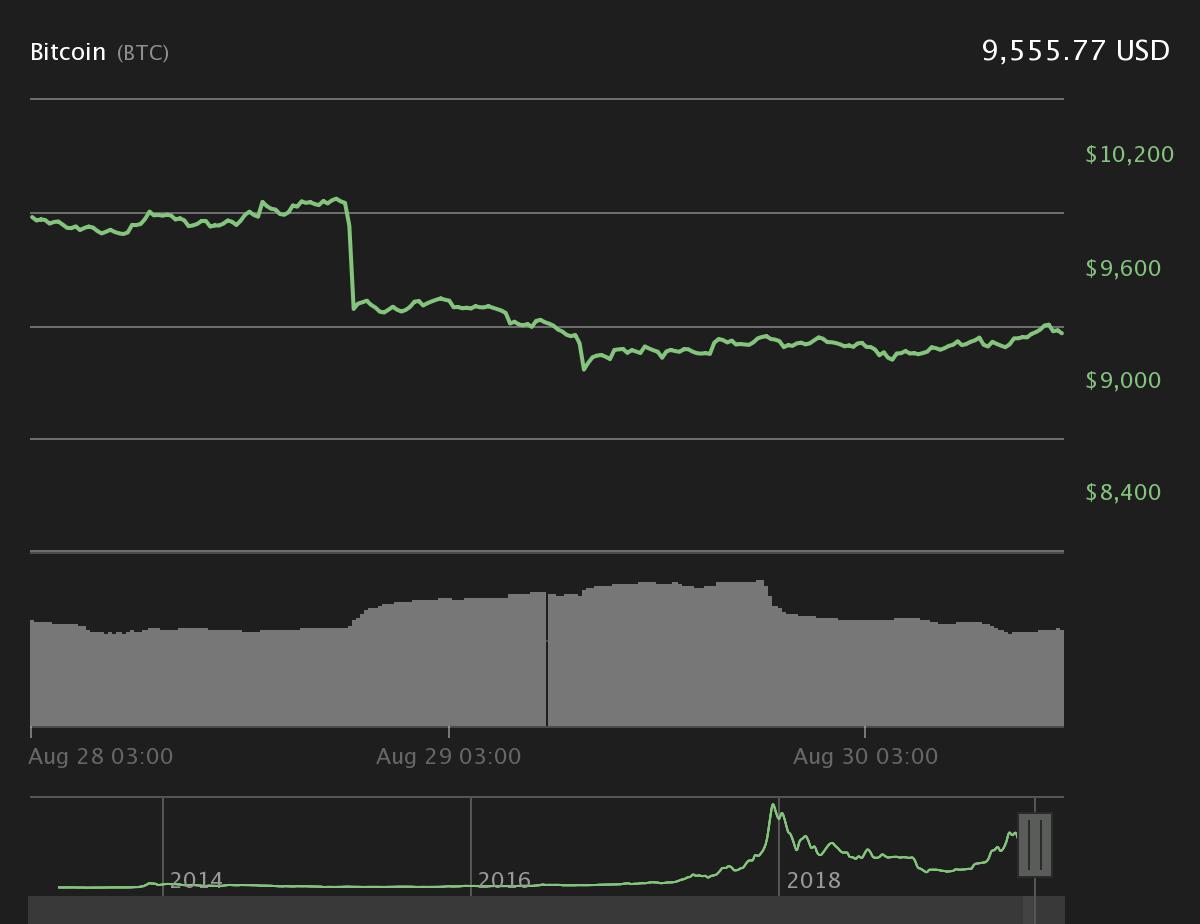 Over the course of the past 24 hours, the price of a single BTC has slid from $10,251 to briefly dipping under $9,400 — with the market sentiment at large appearing to be bearish. Providing his insights on the issue, Russo pointed out:

“I think anytime that a whale investor needs to unload Bitcoin in the open market, for whatever reason, it adds a downward pressure on price. However, I think the risk is relatively low that Wright actually has access to those coins but savvy investors should definitely monitor the situation.”

Additionally, Cointelegraph also got in touch with Daniel Kelman — a New York-based lawyer, creditor of Mt. Gox and co-founder of Oceanex.pro. In his opinion, only Bitcoin SV (BSV) — a digital currency that has Wright as its most vociferous proponent — will be affected by these recent developments, with traders most likely dumping the asset in the near future.

“I don’t see a reason for it to affect the rest of the market, possibly sell orders of BSV into other cryptos push other prices higher. Wright doesn’t have a stack of BTC to sell off, which the market now knows for sure.”

Looking ahead… what happens now?

While there seems to be a lot of drama surrounding the Kleiman-Wright case right now, it appears as though a lot of this talk is confined primarily to the realm of social media. In this regard, the upcoming events (such as the launch of Bakkt’s Bitcoin futures products as well as other institutional investment offerings) are more likely to have a bigger impact on the cryptosphere.

In fact, Russo sees the market continuing its consolidation period for the foreseeable future, despite many people calling for Bitcoin to fill the CME futures gap at around $8,500. According to Russo, “My guess is that the number either gets front-ran or we fall rapidly through it to find support below.”

On the subject of Wright’s future obligations and what happens to him next (from a legal standpoint), Kelman stated unequivocally that there absolutely exists a possibility of the Australian national going to jail for his actions. In his opinion, even though Judge Reinhart did not find Wright’s conduct being at the level of criminal contempt, he ended his order by stating:

In layman’s terms, Reinhart basically called Wright a fraud. It now remains to be seen whether he refers the matter to the U.S. attorney’s office, which would see a new case being initiated against the maligned computer scientist. Expounding his thoughts on the matter, Kelman added:

“Reinhart may now refer the matter to the US Attorney’s office and a case can be brought against Wright from there. Federal judges choose their words carefully. Using words like ‘perjurious testimony’ and ‘intentionally submitting fraudulent documents’ indicates how serious this is, those are felonies. I’d be surprised if this isn’t followed up on by prosecutors.“

It now remains to be seen how retail trader fears of a rumored $2 billion crypto dump (i.e., because of a potential 40% tax on the 500K BTC in question) could play out. On top of that, it will also be interesting to see how Kleiman’s estate seeks to limit their incoming tax hit if indeed it gets hold of the Bitcoins. In this regard, one option could be that the tax be paid out in installments — which would be extremely advantageous for the estate from an economic standpoint — especially if Bitcoin’s value were to continue surging over the next few years.

Step Finance, a Solana-native decentralized finance protocol, announced the completion of a private token sale for $2 million, which will help build and develop its platform. The round, disclosed on Tuesday, saw participation from notable […]

After an extended period of speculation as to when Coinbase would finally go live with its public stock listing, the United States-based cryptocurrency exchange released a blog post earlier this month stating that it had […]

A nightclub in Miami is set to return from oa COVID-19-related shutdown of over a year by accepting Bitcoin (BTC) and other cryptocurrencies as a form of payment. Luxury nightclub E11even Miami announced Tuesday that it […]